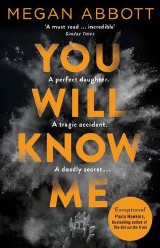 It’s been a few years since I read the only other book of Megan Abbott’s I have read, Bury Me Deep. That book was a very love-hate book for me (love the last third for being amazing, hate the first two-thirds for being so slow), but seeing as the other reviews were to the effect that Abbott had written better, I resolved to read another book by her. It’s taken a long time, and in that time Abbott has stopped writing noir and started writing more mainstream mystery/thrillers, but man am I glad I did.

This is probably the most compulsive book I’ve read so far this year. Although on the face of it it’s a murder mystery, really the most compelling thing about it is how it delves into one family, the Knoxes – their secrets, buried resentments, breakdowns in communication – and the world of competitive gymnastics. It’s told from the perspective of Katie Knox, a thirtysomething wife and mother to two children – 15-year-old gymnastics prodigy Devon, and the oft-forgotten 10-year-old Drew. After a gruesome accident with a lawn mower when Devon was three, Katie and her husband, Eric, decided to enrol her in gymnastics classes to help her regain confidence in her body. Devon turned out to actually excel at gymnastics, and so Eric and Katie have come to sacrifice hugely – taking out a second mortgage on their crumbling house, or (in Katie’s case) spending hours upon hours at the gym every day watching Devon practise – in the hopes they’re giving her the best shot they can at making the Olympics.

But things start to unravel when Ryan, a charismatic young man who does odd jobs around the gym, is killed in a hit-and-run. It’s not so much that the mystery is a real head-scratcher (it’s not), but the way this event exposes so much dysfunction within the family and inside the “booster club” of “gymnastics moms” (and Eric) who fundraise for the gym. There’s a ton of middle-class pettiness between the mums, vicarious competitiveness and snide put-downs made against one another’s daughters. Within the family, you have Katie beginning to wonder whether the “win at all costs” mindset of competitive gymnastics is really good for Devon, while Eric becomes (from the perspective of Katie) increasingly unhinged insisting that it is. And all the while there’s Drew, suffering from a fever for most of the book, noticing things that no one else feels they have the time to hear about.

So for me, what made this such a page-turner wasn’t my desire to find out whodunnit, but the fact that I wanted to know what happened next. As chaos started setting in all around, I had to wonder: What was going to happen to this family?! To Katie? To Devon? Or even with some of the side characters, like Ryan’s mum or his girlfriend, Hailey? That’s what had me frantically flipping pages to the end.

It’s not a book full of likeable characters – they feel realistic, but it’s largely a world of self-absorbed people making utterly selfish decisions. That might be a turn-off for some people. I couldn’t help but feel a bit disappointed by the ending, although I’ll admit it was built towards over the course of the book.

Regardless of that, though, I really enjoyed this book. In its skewering of “teens doing competitive sport at high levels” culture, it treaded some of the same themes as Barracuda, and with its dark tone and treatment of domestic dysfunction it couldn’t help but remind me of Gone Girl, either. All good books, and I’ll definitely be back to read another one by Megan Abbott.