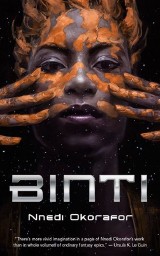 I thought this novella had a unique and interesting setting. The part of the story about Binti leaving home (secretly, because she knows it would enrage her family) and trying to cling on to her people's traditions in a part of the galaxy where she's the only one of her people there, that was interesting. But overall, I felt like this book was rushed and inflicted emotional whiplash so strongly that I just disconnected from the story. How do you just gloss over the mass murder of 150 people because whoops, it was all just a big miscommunication? If you wanted the Meduse to do something REALLY BAD but not unforgivable, it should have been something like damaging the ship catastrophically but the heroes fixed it just in time so that no one died. The way the book actually played out, I never got the impression that Binti gave a crap about her 6–8 “friends” (who she introduced all in one line anyway, and never really distinguished before they all suddenly died), and that's why she got over it so fast that they were all murdered. Just a big WTF that ruined what was otherwise a pretty intriguing set-up.

At this point, I'm torn between wanting to read the follow-up novellas to see if Okorafor does something more worthwhile with the setting, and wanting to NOT read them because I'm not convinced she will and I feel like I'll end up just as let down as I was with this. It's a shame because it really was such a rich and promising setting.