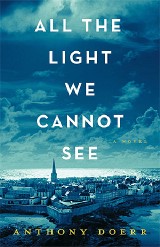 More of a 2.5 star book for me. I feel like the quality of the prose was quite good, there was some interesting detail there, but the book unfolded at such a painfully protracted pace and the characters never quite came alive. Werner Pfennig is a tragic orphan who joins the Hitler Youth to escape poverty; Marie-Laure is a blind girl who’s only lost one parent by the start of the story but soon enough loses a second; and the villain could easily have come from a children’s movie: he is a Nazi who wants to track down a jewel that, according to legend, will make the beholder live forever.

Of the three, Werner is probably the character with the most potential to be interesting: he joins the Hitler Youth for reasons which are fundamentally apolitical, and witnesses a lot of nastiness from those compatriots of his who are more convinced of the Nazi ideology. Nonetheless, he feels he cannot do anything to resist this system he’s become a part of, so even as things get worse and worse he continues filling the role he believes he’s been assigned. Predictably, a clichéd sequence of events causes him to change his mind at the end of the book, and then apparently Doerr didn’t know what to do with him after that, because the character randomly dies when he feverishly walks into a minefield. Much more interesting ends up being the minor character of his sister, Jutta, who was critical of the Nazis all along… but she only plays a small part in the story.

Probably the main aspect of this book that was good was the way it conveyed the everyday experience of life during the war: the German occupation of northern France, the low-level operations of the French resistance, the horror of loved ones going missing and you never finding out their fate, life as a soldier. None of this was particularly groundbreaking, but it maintained my interest through stretches.

There was also an ongoing theme about Marie-Laure’s eccentric family: her great-uncle who never leaves the house after he was traumatised in WW1, her locksmith father who continually devises puzzle boxes for her and creates scale models of the places she lives so she’ll be able to navigate them independently… and places like like the tall, tall house in Saint-Malo and the attic with a radio broadcaster capable of reaching Germany. That was all right, too.

Overall, despite some good aspects, I felt like this book was overly long, with simplistic/cliché and (for me) unengaging major characters. There are far worse things you could read, but I’m sure there are better, too.